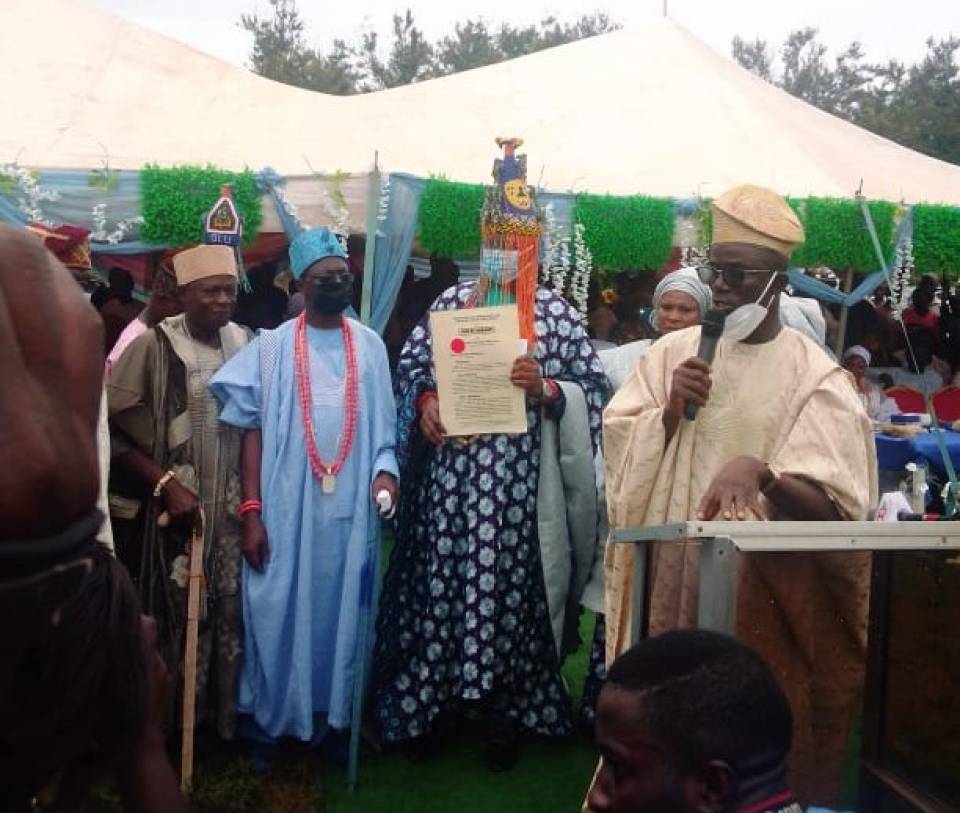 The newly crowned Olu of Imasailand, Oba (Rtn) Kuoye Lukman Olalekan Adeleke, has assured the indigenes of Imasai in Yewa North Local Government of Ogun State, of his commitment towards the development and progress of the ancient kingdom.

Oba Kuoye, made this commitment while receiving his staff and instruments of office from the Governor of Ogun State, Dapo Abiodun, who was represented by the Hon. Commissioner for Local Government & Chieftaincy Affairs, Hon. Afolabi Afuape on Thursday.

While expressing his gratitude to Governor Dapo Abiodun, and the entire members of Ogun state Executives Council for the love and support given to him and the people of Imasai, he promised that his reign will be all inclusive and asked for co-operation from all stakeholders as well as their unflinching support toward a peaceful reign in the town.

He said, “I want to specially appreciate our indefatigable Governor, HE Dapo Abiodun, and other Executive Council members, for standing firm for what you believed in. This is a very important activity and ceremony, and I do not take for granted the trust you have all bestowed on me. It is my firm belief that the unblemished track record of my performance where I have worked, both in the private and public sectors will be used for the development of this town.

Speaking to his fellow contestants, Prince Kuoye said, I am very grateful for this opportunity and I want to thank my fellow contestants who have gracefully accepted the decision of the people. I want my dear brothers that vied this stool with me to know that we are all winners as my Obaship will be inclusive administration.

Continuing, he said, “I therefore appeal to everyone of us in the interest of peace and community stability to steer clear of any act that can put the name of our town into a disrepute. I believe we all should be partakers in the development of the ancient town. A new season begins in Imasayiland from today and we must always stand to defend our people.

Oba Kuoye, from Oyesokun Ruling House, who emerged victorious during the selection process conducted by the traditional chiefs under the strict supervision of officials of Egbado North Local Government officials in Ayetoro in June, boasts of a wealth of experience in public service spanning over two decades; thus, the people of the kingdom are unanimous in their belief that his reign will usher peace and development to the town.

Until his selection to the stool of his forefathers, Kuoye worked with National Identity Management Commission, NIMC. He had also served as Special Assistant to Former Governor Gbenga Daniel of Ogun State and was also a former Secretary and Vice-Chairman, Transition Committee of Ado-Odo/Ota Local Government.

While presenting the staff of office to Oba Kuoye, the Commissioner for Local Government & Chieftaincy Affairs, Hon. Afolabi Afuape, urged the new Olu of Imasailand to cooperate with other traditional rulers in Yewaland, especially, Oba Kehinde Gbadewole Olugbenle, the Olu of Ilaro and Paramount Ruler of Yewaland and members of the Yewa Council of Traditional Rulers, and added that the new Oba should see his ascendancy the stool of his forefathers as a calling to ensure that there is always peace in Yewaland and Ogun State as a whole.

Afuape also advised the new Kabiyesi to also give his unflinching support to the administration of Governor Dapo Abiodun of Ogun state with a view to prove the confidence reposed in him.